Story of the image: Reconstruction of the first Atomic Layer Epitaxy experiment

On December 6th, 2018, I have made a small donation to the world. I uploaded the image, which shows a reconstruction of the first Atomic Layer Epitaxy experiment (nowadays Atomic Layer Deposition) in Wikimedia Commons. (I also created a new gallery, Tuomo Suntola.) 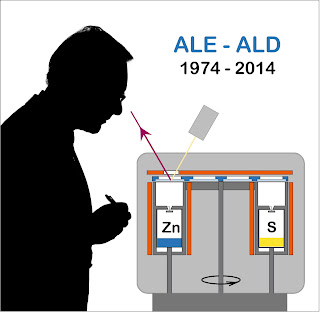 The image is shared in Wikimedia Commons with the Creative Commons Attribute-Share Alike license (CC BY SA 4.0). This means that anyone in the world is free to use the image, also in commercial works, without the need to ask for further permission. The licence requires that one acknowledges the source (BY) and if edits are made, they are shared with a similar licence (SA). Ok ways in my view to acknowledge the source are:


This image is quite special in my view and it was quite an effort to make it, so I am happy it is now shared for anyone's further use. (If someone is interested, I can tell another time, how it was made.) Had the image been used in the way it was first intended, it would not have been possible to share it in Wikimedia Commons. Luckily, things don't always go as planned.

Here, I want to tell the story of this Suntola image, as an example to perhaps learn from.
The image was originally intended as the journal cover image in the Chemical Vapor Deposition issue where the "Suntola ALE story" (https://doi.org/10.1002/cvde.201402012) was published. We realized in advance that the publication would be infuential, and thought to give it this little extra piece of attention, having a cover image in the journal. To do this, we would have to pay, and we would have to transfer the copyright to the publisher --- we were planning to agree with these terms.

Then, it happened that the Finnish Kemia-lehti (specifically, author Maija Pohjakallio) was making an article of the history of ALD, largely on the basis of the FinALD40 exhibition I had organized (as a VTT'er, jointly with University of Helsinki people, within the ALDCoE). The reconstruction image was material which perfectly fitted the article. I thought it would be a waste not to share it with the Finnish Chemist's community. So I gave it to be used Pohjakallio's article - screen capture from the finished article below. 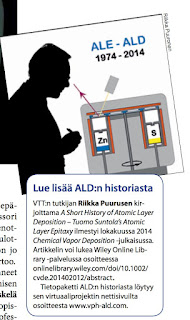 Soon, it was time to finish the article to the Chem. Vap. Deposition journal. I sent the cover image for the publisher for consideration, as planned. But, it turned out: they refused to use it. The reason was that the image was no longer new, as it had been in the Kemia-lehti article. So, our plans of getting the cover image, were turned down. (This also meant that we saved money and retained the copyright.)

So, I had a beautiful, useful image, published as a small corner piece in Kemia-lehti. What to do with it?

There was a plan to make the FinALD40 exhibition material available via the internet on November 29, 2014, exactly 40 years after the first patent on Atomic Layer Epitaxy was applied. For the internet edition, Prof. Markku Leskelä wrote a nice foreword. This image, originally planned as cover for a journal article, now found a place as the cover of exhibition material (pdf e.g. here).

In hindsight, I am happy that (i) we worked out this image together with Tuomo Suntola - it really is quite an accurate reconstruction of the first experiment, full with realistic details although being cartoonish. (ii) I am also happy that the publisher refused to use the image. Had the image been used as a journal cover, I think we would not have been allowed to use it as the cover of the exhibition material. And I surely would not have been allowed to upload it to Wikimedia Commons for anyone's use.

Let's see if anyone will ever use the image for anything!