The message below was sent to 78 VPHA contributors.

The poster abstract to the Baltic ALD conference has been updated for affiliations and acknowledgements. Please find attached the abstract for final check.
Read more »
Posted by Riikka Puurunen at 20:35 1 comment:

For your information: as we anticipated - see VPHA status update 17.1.2019 - the abstract submission deadline for the Baltic ALD conference has been postponed. The new extended deadline is Jan 31, 2019, see https://www.eurocvd-balticald2019.lu/. We are grateful for this extension.

Thank you to the several people who responded within the original DL (20.1.): sent information of new affiliation, proposed new theses to the list, commented that the abstract contents are ok, and confirmed authorship or will to be just acknowledged. Notes of updates to come are show in real time here <link removed>.

With the extended submission deadline, we can agree a new internal deadline related to updating info for the poster abstract. We can agree that author - and thesis! - information that comes in by Jan 25 can be accounted for in the abstract. Information sent in later than that can still be accounted for in the poster itself.
Read more »
Posted by Riikka Puurunen at 11:12 No comments:

The emails below were sent on 17.1.2019 to 76 VPHA contributors and 66 prospective contributors.

The VPHA status update below was just submitted to all VPHA contributors <attachment and hyperlinks removed>.

As you can read, we are planning to activate VPHA in 2019 again. We will start with poster presentations related to the doctoral thesis list gathered.

Read more »
Posted by Riikka Puurunen at 19:52 No comments:

In VPHA, we have in the past years been building a list of doctoral theses related to atomic layer deposition (ALD). The list currently contains already over 350 entries - nice draft illustration of the contents of the unfinished list below - thanks Felix Mattelaer for this! 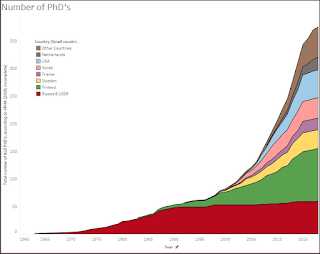 It would be great, of course, if we could have a complete list - the whole research field of ALD would greatly benefit. There are certainly many theses missing from the list still - likely at least from China, Japan, Korea, and likely many other countries, too. We have set it as a goal to finalize the list in VPHA to the status at the end of year 2018, the year Suntola and ALD received the Millennium Technology Prize.

To complete the list, we welcome everyone to check if the list is complete and propose additions.

Read more »
Posted by Riikka Puurunen at 12:46 No comments:

First article related to catalyst preparation by atomic layer deposition (ALD) originating from my work as a professor at Aalto University has just been accepted for publication in Topics in Catalysis, special issue on the 18th Nordic Symposium on Catalysis. I have used ChemRXiv for sharing the preprint, so everyone can access the unformatted article already. Link: https://doi.org/10.26434/chemrxiv.7204847.v2.

Why to share information of an accepted article / preprint in ALD History Blog? It is because the Introduction of the article is historically valuable. Namely, it contains original references to both "molecular layering" related and "atomic layer epitaxy" related early ALD works on catalysis. As - to the knowledge of the undersigned - none of the existing reviews written on ALD for catalyst preparation adequately describes and cite the early works, the two passages in the Introduction including the cite references become valuable as a "microreview" on the area. Worth spreading word about.

Posted by Riikka Puurunen at 12:15 No comments: