"Growth per cycle (GPC)" (unit e.g., nm) and "growth rate" (unit e.g., nm/cyc) have been described as alternative names to denote the time-independent amount of material deposited in a completed atomic layer deposition (ALD) cycle. The recent Baltic ALD 2016 conference confirmed the trend which I have noticed already earlier: the ALD community more and more shifts to use GPC.

I have been advocating the use of GPC since the early 2000s. A bit of history may be in place to explain why I chose to use GPC in the first place---how did it all get started? In the following, I will tell how one specific person has played a major role in the background. 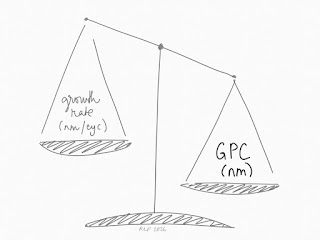 I made my doctoral thesis at Helsinki University of Technology (nowadays Aalto University) in collaboration with Fortum Oil and Gas in 1999-2002. The topic of the work was the synthesis by ALD and testing of heterogeneous catalysts; the supervising professor was Outi Krause (in the photo below).  The doctoral work grew out of my M. Sc. thesis work made at Microchemistry Ltd. in 1998, where Dr. Suvi Haukka acted as one of my advisors. Tuomo Suntola was around, too. Links to the resulting publications, as well as my later works, can be found in ORCID: http://orcid.org/0000-0001-8722-4864.

As a young doctoral student, I was planning to adopt the term "growth rate" without further thinking, too, but there was an obstacle in the way. Namely, Prof. Krause, specialized in industrial chemistry and very familiar with chemical kinetics, did not allow me to use "growth rate" to describe the amount of material grown in an ALD cycle. The reason is simple: this quantity is by no means a "rate"; it does not describe a change of a quantity with time. Upon her request, I had to come up with a better term. Digging in the literature I found another term, "growth per cycle", perhaps from the review by Goodman and Pessa (1986). Term GPC was accepted by for professor Krause, and so I adopted it for use then and systematically in later works.

Gradually over the years, I have observed how the term GPC has been getting more and more widely used in the ALD community. At many previous ALD conferences, I have seen how leading ALD companies including ASM International and numerous ALD laboratories around the world have standardly started using it. At the latest ALD meeting, Baltic ALD 2016 conference in St. Petersburg in early October (travel report here), I with pleasure observed how the usage of the term is spreading still further, as for the first time, I saw it being used in some presentations by the University of Helsinki, VTT's core collaborator in the Finnish Centre of Excellence in Atomic Layer Deposition. In the invited presentation by Beneq, GPC and growth rate were even used side by side in the same slide: GPC to denote the amount of material deposited in a cycle and growth rate to denote the amount of material deposited in a time unit. Such simultaneous usage of GPC (nm) and growth rate (nm/min) has been requested in the recent active ALD terminology discussion in the LinkedIn, ALD - Atomic Layer Deposition group, direct link to post here.

Although as a doctoral student I may shortsightedly have had other feelings, in hindsight, I am grateful to Prof Outi Krause for having made me to stop and think a second time. Discussion on terminology can be fundamentally important and can help a field progress.

In my view, using the term "growth rate (nm/cyc)" is not correct but is prone to create misunderstandings. What do you think? Feel free to join the LinkedIn discussion and share your views.

Posted by Riikka Puurunen at 18:39