July 30, 2016, a new page has been created in ALD History Blog: ALD glossary: abbreviations and Twitter. While I have been thinking of setting up this page for a long time, the rapidly increasing use of Twitter in the ALD community and the recognition of the "best tweet" at ALD 2016 made the need immediate. The glossary lists (link) are not final but just a start; comments and suggestions for improvements are welcome. 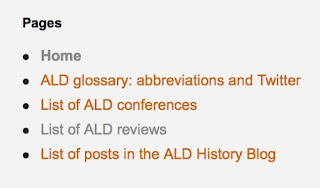 For the Twitter hashtag list, I tried to trace back and describe there the first use of the hashtags. Sometimes, this was easy as the hashtag is uniquely used for ALD (#ALDep, #BalticALD, #FinALD40, ...); sometimes, this is more difficult as the hashtag is in multiple use in Twitter (e.g., #ALD2015, #ALD16, #ALD2016, #VPHA). In Twitter, no-one "owns" a hashtag and anyone can start using whatever they like, also one that is already in use. Twitter is by its nature chaotic; good hashtags are keywords which help to navigate through the chaos.


Regarding #ALDep: this Twitter hashtag, proposed by myself (@rlpuu) on Jan 23, 2014 soon after I joined Twitter, has become a successful hashtag for Atomic Layer Deposition as it has been adopted by many different types of tweeters globally. The International ALD conference series, organized by/in collaboration with AVS, in turn, would benefit from a unique hashtag which enables easy retrieval of shared content also after the conference. Could the ALD Twitter community could discuss this topic & come up with a strong suggestion well before the next conference in Denver, July 2017?