The last weeks have seen increasing activity related to Atomic Layer Deposition in Twitter with the ALD 2016 Ireland conference. Welcome all new ALD tweeters! Anticipating that there will be more individuals and laboratories joining in the near future, here are some tips for beginners from me---I have been an active Twitter for >2 years and have benefited from Twitter in many ways. 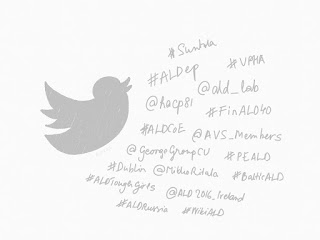 (1) When you first sign up for Twitter, you will to choose your unique username - the one starting with @. You can find advice on the internet on how to choose a good one, for example here. ALD scientists have many types of names, for example: @sean_t_barry, @simon_d_elliott, @MikkoRitala, @BMCtheALCHEMIST, @hacp81, @jv3sund, @rlpuu. My advice: choose a username @... that it as short as possible, yet easily recognizable. When someone tweets you, each character of your username will consume of the 140 character limit of a tweet.

(2) "Hashtags", starting with #, are Twitter's equivalent for key words. A key word list related to ALD is updated in the ALD Glossary, http://aldhistory.blogspot.fi/p/ald-glossary-abbreviations-and-hashtags.html. No-one has control by the hashtags and these cannot be forced; it is the Twitter community collectively who chooses to use or not to use a certain hashtag. Good ones and those proposed timely often end up in wide use. #ALDep is a generally accepted as a hashtag for ALD. We don't use #ALD, as it would give too many mix-ups due to its multiple meanings (African Liberation Day, AdrenoLeukoDystrophy, ...).

(3) Everything that you write on Twitter, is public. (Except the private messages.) Twitter may look chaotic first, and it may seem to difficult to find back contents, so you can think that your tweets can get lost and not found back. In the end, everything is public and everything can be traced back. My advice: think twice before you publish and publish only contents which you feel confident of staying in the internet for a looong time for anyone's and everyone's attention.

(4) In Twitter everyone can in principle interact with anyone. You can "follow" a person, to see his/her tweets appearing in your tweet stream. If you follow someone, often (though not always) they will follow you back. You can reach out to a person by mentioning their @username in your tweet (you may get a response, or not). Other Ways to interact: favourite, retweet, reply.

(5) Then something a bit more complex, which puzzled me first. When you reply to a tweet, the reply will start with @username... This tweet will be notified to the persons mentioned in the reply, but it will not appear in the general tweet stream. If you want your tweet to appear in the general stream, you need to add a character before the "@". Most often, this is done with a point: ".@username". Click the hyperlink for an example of a regular reply by @MikkoRitala (his first tweet ever!); and a reply meant for the general tweet stream by @ALD2016_Ireland. Remember, now matter how you start a tweet, it will always be public and discoverable (and linkable).

Twitter may seem complex and chaotic at start, but it is to be learned, and can be fun and useful. Try it out by creating your @username, following a few people --- @rlpuu, to start with :), observing, and writing Your First Tweet. Happy tweeting: I hope it will be as useful for you as it has been for me!